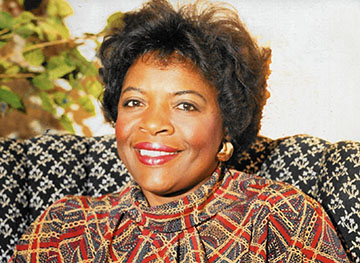 Those who knew Ella White Campbell remember her as a friend who loved to cook and entertain, a neighbor who was passionate about her Randallstown community, and a fierce advocate for a quality education for students in area schools, better recreation and career opportunities for young people, and bringing quality businesses on the Liberty Road corridor.

If you found yourself on the opposite side of an issue in which Campbell was involved, you had better be prepared to defend your position with facts. She was organized and articulated her arguments well.

Campbell, an educator and community activist, as well as a devoted wife, mother, grandmother and great-grandmother, had touched the lives of many people. She died on May 15 at age 75 due to complications from cancer. Her spirited impact will continue to be felt.

Members of the Randallstown branch of the NAACP that Campbell founded shared memories of her at one of their meetings last month.

Pasteur says that in one of their last conversations, Campbell told her to “Keep working on Dr. Dance and all of those folks about education.”

Old Court Middle School principal Kyria Joseph says, “Dr. Campbell planted a seed when I was a teacher at Woodlawn Middle School and that helped me to get where I am today. She inspired my leadership, which catapulted me to be the principal at Old Court. She always advocated for resources for students who didn’t have and was making sure that as school educators we had the best resources available.”

Born Dec. 14, 1940 in Fountain Inn, South Carolina, Campbell came to Maryland with her parents in search for better jobs, housing and schools for her and her siblings and settled in Anne Arundel County.

Early in her career, Campbell worked as a recreation leader early and founded a Camp Fire Girls group in Cherry Hill. She later became a middle school English teacher, English Department head and assistant principal in Baltimore City, and a professor at Coppin State College. She earned degrees from Morgan State University, the Johns Hopkins University and the University of Maryland. She received numerous awards from myriad organizations.

Campbell served as a former chair of Baltimore County Schools’ Minority Achievement Advisory Group and was well known by the Superintendents. Dallas Dance recognized her contributions at a Friends of the Randallstown Library meeting in May.

Next-door neighbor Aaron Plymouth, who succeeded Campbell as president of Stevenswood, remembers Campbell as kind, thoughtful and thorough. He says, “She moved into Stevenswood in the fall of 1988. Next spring, she invited the neighborhood to her house and 45 people came. Out of the meeting, we selected officers. She became president and got things running and she never stopped.”

He saw as one of her most prized accomplishments the establishment of a teen council that lasted for 15 years. Young people were taught leadership skills and parliamentary procedures, took fun and educational field trips and participated in a book of the month club, Plymouth said.

She was quick to write letters, convene community forums, attend County Council meetings and travel to Annapolis to testify on proposed legislation. Remembering Campbell as “focused and determined” in her approach, Pasteur says, “She stayed on an issue until it was resolved.”

Campbell is survived by her devoted husband, Charles Campbell, daughter Brenda Brooks of Richmond, six grandchildren, two great-grandchildren, three sisters, other family members and friends. She will be sorely missed.