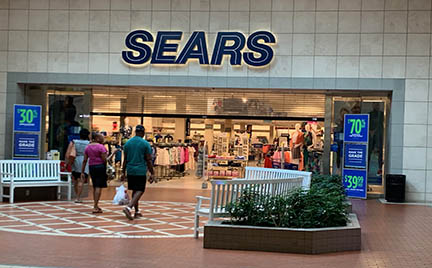 After years of instability and rumors that the end was imminent, Sears at Security Square Mall will shut its doors in late October.

The Woodlawn store located at 6601 Security Boulevard had escaped the chopping block last year, but appeared on the company’s latest list of closures, which identified 21 Sears and five Kmart stores that would cease operations. Liquidation sales at these stores are expected to begin on Aug. 15. The Sears Auto Centers at the shuttering stores will close in late August.

Signs of decline have been noticeable. In recent years, the Woodlawn Sears closed its top level, which at one time housed its children’s clothing department, bedding and appliances, and transferred much of that inventory to the main level. The store also shut off some of its entrances and shortened its operating hours. Fewer associates are around to assist the dwindling number of shoppers looking to buy apparel, housewares, and lawn and garden equipment.

The demise of the Woodlawn Sears, an original mall anchor, puts the future of Security Square Mall in question. It leave Macy’s as the only major anchor, along with Burlington. The community is anxious to see development plans for the mall to move forward.

Set the Captives Free, a non-denominational church in Woodlawn, acquired the long-vacant 160,000-square-feet space in the south end of the mall (formerly Seoul Plaza and that at one time housed J.C. Penney) to open the O.W.E. Center for outreach, worship and education services. Eventually, the center will house a sanctuary, county offices and a 24-hour day care center.

Once a dominant retailer, Sears began streamlining operations due to lagging sales. Last year, it announced more than 250 Sears and Kmart closings that would take effect in October, November and December, as well as a restructuring plan. Earlier this year in February, Sears emerged from bankruptcy under then-owner Sears Holdings. During the transition to a new owner, Transform Co., the “old Sears” and “new Sears” tussled over payment and debt issues.

In an Aug. 6 statement, the Transform Co. called its decision the “right course” to close 21 Sears and five Kmart stores in late October and accelerate expanding a smaller-store format.

Transform attributed the latest round of store closings and challenges it faced returning stores to sustainable levels of productivity, to “differences with Sears Holdings over our purchase agreement and a generally weak retail environment.” The challenges, Transform states, “have unfortunately affected our performance and limited our strategic choices.”

Eligible associates will be offered severance. The Woodlawn Sears is the only store to close in Maryland in this latest announcement. This will leave the White Marsh Mall location as the only Baltimore County store. There are seven other full stores in Maryland, as well as the Hometown brand stores and outlets.

Transform will continue to evaluate stores but stated it cannot rule out additional closures.