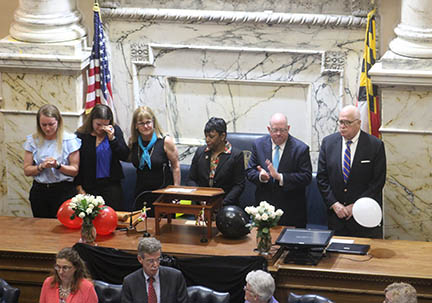 The 439th session of the Maryland General Assembly opened with Senate President Mike Miller’s announcement that he would be undergoing chemotherapy for metastatic prostate cancer and ended with delegates, senators, the Governor and staff participating in a somber tribute to Speaker of the House of Delegates Michael Busch. Busch died on April 7, the day before the session’s adjournment.

In her role as Speaker Pro Tem, Baltimore County District 10 Delegate Adrienne Jones, who had occasionally filled in for Busch during his 16-year tenure, and more so in recent years during his illness, led the tribute. Earlier in the day, she presided over the proceedings, which began at 11 a.m. (See article about Jones on page 6.)

When Miller was absent, it was another Baltimore County legislator, Sen. Kathy Klausmeier, who led the Senate as majority leader.

Among the legislators who viewed the session as productive were District 10 Del. Ben Brooks and District 11 Del. Dana Stein. Brooks said he was pleased that issues related to education, the environment, economy and community wellness will make an impact on Marylanders. He hopes to continue his push to get legislation passed that will “bring more fairness to pension reform.”

The half-hour tribute came after a hectic final day of the 90-day session. Legislators introduced more than 2,400 bills in the Senate and House of Delegates, debated hundreds in committee and in chambers, and passed a $46.7 billion operating budget and $1.08 billion capital budget. The Governor vetoed five bills, which lawmakers overrode them.

Bond bills Brooks sponsored will provide funding for the National Center on Institutions and Alternatives to replace heating and cooling equipment, St. Luke’s United Methodist Church to restore its fellowship hall, construction of a new Upperco Volunteer Fire Company, and construction of an outpatient mental health clinic for the WIN Team in Windsor Mill.

Among the most meaningful, he said, was legislation that authorized many of the policies recommended by the Kirwan Commission on Innovation and Excellence in Education. House Bill 1413/Senate Bill 1030 provides $725 million over the next two years to fund increases in teacher salaries, expand pre-K, and enhance health-based services to students and families. An amendment will create a new Office of Inspector General for education that will be responsible for accountability and transparency in education spending.

Stein was pleased that his bill, House Bill 923, passed to create a task force to study transportation access for low- to moderate-income Marylanders and those with disabilities to access jobs, social services and other opportunities. He and his colleagues also sponsored bond bills to install a playground and resurface the gym at Torah Institute of Baltimore, expand the living and sleeping quarters at Chestnut Ridge Volunteer Fire Company, and for a turf field at Pikesville High School.

Some of the other key bills that passed.

Start of School Year. Senate Bill 128 repeals the Governor’s executive order that schools start after Labor Day and leaves it up to the local boards of education. The Baltimore County Board of Education approved a 2019-2020 calendar that has schools opening after Labor Day on Sept. 3.

Blueprint for Maryland’s Future. Senate Bill 1030, based off of recommendations from the Kirwan Commission on education, puts more funding into early childhood education, teacher retainment, and helping poverty-stricken students over the next three years. It goes into effect on June 1. Miller and Busch led the successful push for $725 million in education investments.

Smoking Age. House Bill 1169/SB 251 will raise the age at which individuals can buy cigarettes, electronic smoking devices and other tobacco products, from 18 to 21 in Maryland. The bill takes effect Oct. 1.

Juvenile Justice Council. House Bill 606 establishes the Juvenile Justice Reform Council, which must use a data-driven approach to develop a statewide framework of policies to invest in strategies to increase public safety and reduce recidivism of youth offenders. The council must submit an interim report of its findings and recommendations to the Governor and General Assembly by Dec. 1 and a final report by Dec. 1, 2020.

Unemployment Benefits for Federal Workers. House Bill 336 authorizes that federal employees who must report to work and are not paid during a federal government full or partial shutdown due to a budget can receive unemployment benefits or have access to a no-interest loan program.

The bills represent a compromise to a situation that arose when the state notified retirees weeks before the open enrollment period was set to begin that it was requiring retired state employees 65 and over to enroll in Medicare Part D for their prescription drug benefit. Retirees complained that their costs would skyrocket and that the state reneged on a commitment to provide health benefits.

The bills also require the Department of Budget and Management, which oversees state employee benefits, to set up a program that reimburses the participant for out-of-pocket costs for a life sustaining drug that is covered by the state plan but not covered under the Medicare prescription drug plan.

Voter Registration. Senate Bill 449 allows individuals to register, and then vote, on General Election Day at a precinct polling station in their respective county. If the person votes at their precinct they will be issued a regular ballot. If they vote in their county, but not their assigned precinct, they will get a provisional ballot. Currently, individuals can register at the polls during early voting. The legislation will go into effect on Oct. 1.

HIV Treatment for Minors. House Bill 1183 and Senate Bill 251 extend to minors the capacity to consent for treatment to preventative HIV treatment. The bills, which are viewed as supportive of LGBT youth, take effect Oct. 1.

For many legislators, one of the session’s biggest disappointments was the failure of House Bill 727, Build to Learn Act of 2019, to pass. The bill would have authorized $2.2 billion in school investment over six years.

In addition, the End-of-Life Option Act also failed to pass both chambers. House Bill 399/Senate Bill 311 would have allowed people with a terminal illness six months from the estimated time of their death to end their lives with a lethal dose of prescribed medicine. The bill passed in the House, but failed on a tie vote in the Senate.