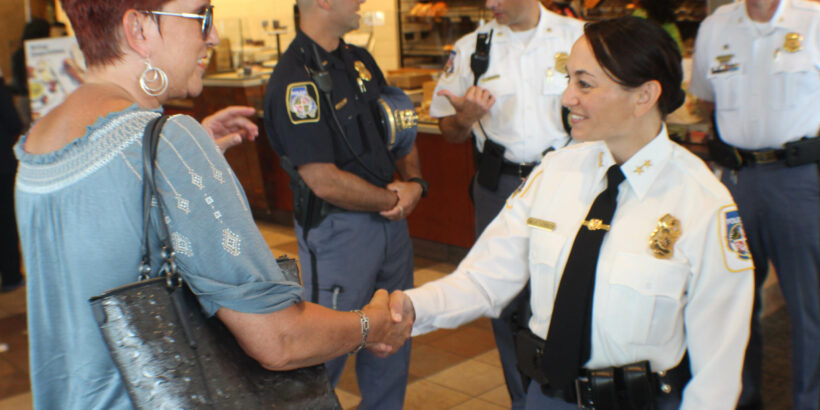 Baltimore City Police Department data indicates that crime in the county last year was down by 4.5 percent overall compared to 2017. But reports of homicide, shootings and other major crime in the northwest and southwest areas are weighing on communities.

News of homicides in local bars, residences and on the street, or reports of auto thefts, robberies and home invasions also are making residents anxious and feeling helpless.

Newly appointed Police Chief Melissa Hyatt, who grew up in Randallstown, has been on the job since June. The county’s first woman chief, she replaces Terrence Sheridan, who retired. Previously a colonel with the Baltimore City Police Department and vice president of security at Johns Hopkins, Hyatt brings 22 years of law enforcement experience to the job. She almost immediately began looking for ways to engage with the community since being sworn in.

She has heard from residents at three town halls in July, including one at the Randallstown Community Center. Citizens express appreciation for the service of law enforcement, but some are bringing up the same complaints — uneven response from 911 operators, aggressive police officers and an insensitivity to citizens of color and different cultures.

“I want to ensure that our supervisors are making sure their officers are doing what they need to do,” she said. “When the agency needs to be held accountable, I want to make sure we do it the right way.”

Recognizing the stress and exhaus-tion that comes with police work, Hyatt said she will make sure the department’s 1,900 sworn officers have the tools they need to keep them safe and healthy. “That helps them have good family lives at home and come back ready to come in and work and to serve you the best ways possible,” she said.

With regard to training, Hyatt said she values advanced de-escalation training and training to interact with different categories of citizens, such as those with intellectual and development disabilities.

“We will continue to look for more opportunity to make sure officers are as prepared as possible,” Hyatt said.

As part of her new Chief in the Community initiative, where she is stopping by locations around various communities to meet and greet neighbors, Hyatt and her team stopped by Panera Bread on Security Boulevard in Windsor Mill on July 26.

Customers, some stopping in for lunch from local businesses such as Centers for Medicaid and Medicare Services, Social Security Administration and car dealerships, enjoyed meeting Hyatt and members of the Towson central and Woodlawn District 4 command staff.