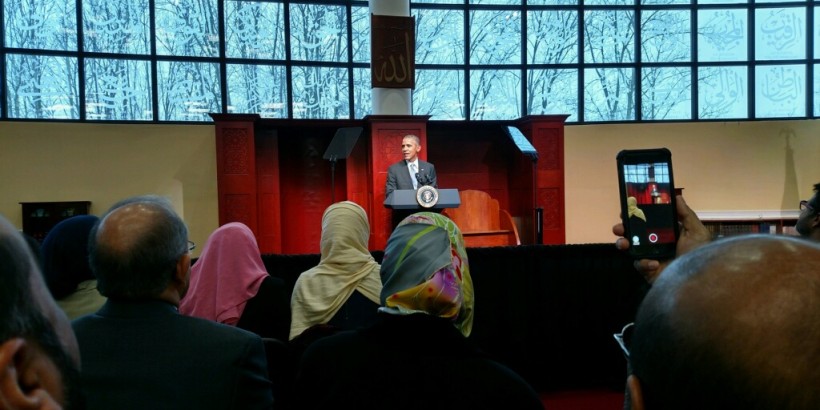 In his seven years in office, President Barack Obama had not visited a mosque in the U.S. When he made the decision to do so, the mosque he selected, from the more than 2,100 across the country, was one just outside of Windsor Mill.

On Feb. 3, the President arrived before noon at the Islamic Society of Baltimore, located off Rolling Road, to deliver remarks to a group of Muslim Americans, elected officials and other invited guests.

Sen. Shirley Nathan-Pulliam, Delegates Charles Sydnor III and Pat Young of legislative District 44B; and District 2 Councilman Tom Quirk were among the attendees. A small group, including area residents and a Muslim family from Philadelphia, waited outside the mosque’s gates for a glimpse of the President, but had to settle for a view of his motorcade.

Inside, President Obama began his 43-minute speech by thanking Muslim Americans “for serving your community, for lifting up the lives of your neighbors and for keeping us united and strong as one American family.”

He acknowledged their fear as Americans about the threat of terrorism and their concerns about being blamed and targeted for the terrorist acts of a few.

Acknowledging that Christians, Mormons, Catholics and Jews have also been attacked throughout our history, President Obama said, “If we’re serious about freedom of religion, we have to understand that an attack on one faith is an attack on all our faiths.”

He added, “We have to be consistent in condemning hateful rhetoric and violence against everyone, and that includes Muslims here in the United States of America.

“None of us can be silent. We can’t be bystanders to bigotry. We have to show that America truly protects all faiths.”