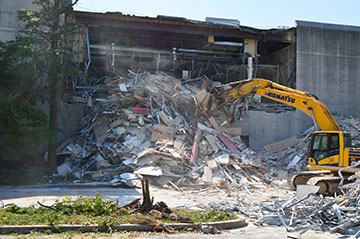 Owings Mills Mall is in demolition mode, as heavy equipment is taking down the 30-year-old mall to rubble.
While the community has lamented the slow decline of the mall, which closed in January and once catered to upscale shoppers with a Saks Fifth Avenue, Lord and Taylor and Macy’s as anchors, residents are looking forward to a new shopping experience. The redevelopment plan, they were told, was to replace the property with an open-air shopping center similar to Hunt Valley Towne Centre and the Avenue at White Marsh. Many looked forward a robust mix of department and big box stores, smaller national discount retailers and boutique shops.
Those expectations were dashed when District 4 Councilman Julian Jones sent an email inviting constituents to two community input meetings to weigh in on a proposal being considered by mall owner Kimco Realty to have Walmart anchor the mall with a supercenter, which typically sells groceries, home furnishings and electronics, and include hair and nail salons and other services.
About 500 people attended the meetings held Aug. 29 at the Owings Mills Library and Aug. 31 at the Randallstown Community Center. Both were was standing room only.
In the Owings Mills meeting, the crowd got boisterous and chanted, No Walmart! No Walmart!, at times drowning out Jones’ explanation that the decision is ultimately the developer’s regarding which stores will lease space at the mall.
In Randallstown, people were just as passionate. District 10 Delegate Adrienne Jones told the attendees that the community deserves stores that “we want to shop in.” Tony Basemore, executive assistant to County Executive Kevin Kamenetz, insisted that Kimco should “reach a little higher.” Baysmore stated that the hard work the county put into getting Walmart and Ruby Tuesday to open locations on Liberty Road should not go for naught.
“[Kimco] can do anything within zoning by law,” Jones said. “My powers as your councilman are somewhat limited but I will use every tool in the toolbox.” It is risky, he added, to use the law to put a limit on the amount of mall space a store could occupy as a way to keep Walmart out. That strategy would also prohibit similar-size stores such as Ikea, Cosco and Lowe’s from leasing space.
Jones assured the group that representatives from Kimco were in attendance at the meeting and are hearing the community’s concerns first-hand.
One by one, people took to the mics to express their objections to a third Walmart within a four-mile radius and indignation that the developer could not come up with a more creative plan for a community that has one of the highest household incomes in the state, according to the U.S. Census.
Among the suggestions were a museum, arts showcase and high-scale shopping center. Many stated that they do not shop at Towson Town Center and the Mall at Columbia.

Another person criticized developers for not coming up with innovative solutions. The woman also noted the “repetition” of stores on Liberty Road.
People complained that after a long battle to open a Walmart on Liberty Road commercial district they were troubled that the Randallstown store, along with the one on the 9700 block of Reisterstown Road around the corner from Sam’s Club, the retailer could identify it to shut down in favor of the Owings Mills location, which is some about miles away.
Susan Ellerbee, a mass communications teacher at Randallstown High School, shared that many of her students work part-time at the Liberty Road store and would be out of much-needed jobs if that location would close.
There is a Walmart two miles away on Reisterstown Road around the parking lot from Sam’s Club, and another that opened in the 8700 block of Liberty Road in Randallstown to much fanfare as part of the efforts to bring more national retail businesses and restaurants to the commercial district of Liberty Road. Randallstown residents are also making the 10-minute trip to a superstore that opened in Eldersburg last fall.
Jones said, “I will do everything in my power to make sure the Randallstown Walmart does not close.”