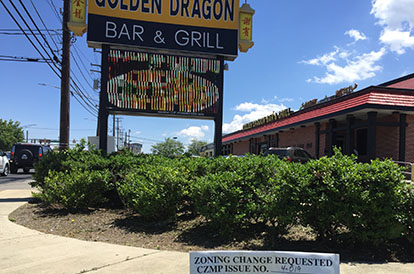 A request to rezone the 225-acre property at Woodholme Country Club in Pikesville to accommodate 40 acres of townhomes in addition to the single-family homes has drawn a lot of debate. There is community opposition for the plan, which was originally to build all single-family homes.

Interestingly, there is research that suggests that a gravesite for African-American slaves lies nearby the property. However, the developers believe it is their right to build on as desired.

And therein lies the challenge, as Baltimore County goes through its every-four-years 2016 Comprehensive Zoning Map Process. The county’s Planning Department Staff and Planning Board make recommendations on the hundreds of zoning requests. The County Council must ultimately decide to approve, reject or modify the request, delicately considering the interests of all parties. The public can weigh in at various stages of the process.

Most of these decisions on land use are made through two types of zoning processes. One way is the Comprehensive Zoning Map Process (CZMP), which takes place every four years. What is unique to the CZMP process is that any citizen may request a zoning change on any property in the county.
Whether it’s a developer looking to build an office building or townhome community, or a resident looking to subdivide his or her rural property so family members can build homes, or the county desiring to designate an area for green space, a change in the zoning designation may be necessary before they can proceed.

Guiding that process is Scott Phillips, an attorney who chairs the Planning Board. The board must weigh the interests of the community against that of the property owner. “I guide the process. I don’t vote unless there’s a tie. I make sure voices are heard and make sure people come to a consensus.”
The public input process began in March. County-wide, more than 500 petitions have been filed, and scores of people turned out to testify in favor or in opposition to an issue, to just show their support with their presence.

In the seven meetings held before the Planning Board in each councilmanic district, board members considered everything from changing the zoning on 225-acre plots of land for homes to permitting a car wash station for a volunteer fire department. According to the county’s log of issues, a total of 119 of them are in Districts 1, 2 and 4.

After those hearings, the board and Department of Planning staff made recommendations to the County Council. The council can accept or reject the recommendations. The council held hearings in June. In making the final decision on each zoning request, the council will adopt the official zoning map in a special session on Tuesday, Aug. 30, in their Historic Courthouse chambers at 400 Washington Ave. in Towson.

Phillips says community input in the zoning process is “extremely important.” It’s the only process in the county where anyone can raise a zoning issue that affects a neighbor, community organization, council member or member of the Planning Board. Once it is raised, the property is in play for potential changes in zoning that will last the next four years.”

Among the zoning change requests that have attracted a lot of attention are proposals that would pave the way to demolish the Golden Dragon, which has gone from a Chinese restaurant to sports bar in recent years, and build a convenience store and gas station. Nearby residents say they don’t need another such establishment on the already-congested Liberty Road corridor.

Once again, in District 1, Whalen Properties is requesting a zoning change to bring a Promenade to Catonsville on about 15 acres north of Wilkens Avenue and southwest of Interstate 695. This time out, the proposal is a scaled down version of what the developer sought in 2004. This plan features hotel, office and retail space on land the developer already owns. The Promenade would not depend on acquiring some of the Spring Grove Hospital land from the state of Maryland, as was the case 12 years ago, when the developer ran into intense opposition from community members who wanted Catonsville to maintain its quaint Main Street feel.

A proposal to expand Matthews 1600 on Frederick Road also got some attention. Owners have asked for a business local designation so they could add an outdoor deck. The Planning Board recommended a modified zoning designation that would allow some expansion of the restaurant’s footprint but exclude other uses.

Phillips takes his role seriously. “We are in a rare situation in Baltimore County, where our recommendations, and ultimately the council’s decisions, have the impact of significantly increasing or decreasing people’s property values,” says Phillps. “That should not be done ill advised. We should weigh the community as a whole and property owners. We must be careful about impacting someone’s property rights.”

To view the requests on an interactive map and recommendations, as well as full details on the Comprehensive Zoning Map Process, visit baltimorecountymd.gov/Agencies/planning/zoning/czmp2016/index.html.