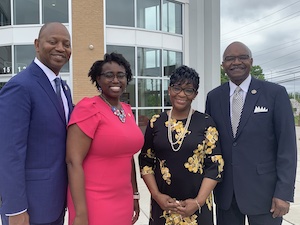 In this Primary Election 2022, everything is on the line for District 10. Pride, respect and progress are just a few of the important non-tangibles. Plain and simple, the community deserves a leader with integrity, character and ethics, and should not accept anything less.

For the past 20 years, Sen. Delores Kelly has been the only Senator elected to represent District 10, which primarily includes Randallstown and parts of Reisterstown and Owings Mills. This former Coppin State College dean and a founding director of Harbor Bank served four years in the Maryland House of Delegates and her remaining 28 years in the Senate. Remarkably, during her tenure she’s sponsored hundreds of bills, including 170 that have become law. Kelley is chair of the powerful Senate Finance Committee and has been a go-to person to shepherd major legislative initiatives on behalf of governors, senate presidents and other legislative leaders. She has mentored many up-and-coming lawmakers, including Speaker of the House Adrienne Jones and Sen. Charles Sydnor III of the neighboring District 44.

Who is Best to Succeed Senator Kelley?

Kelley’s decision to retire this year after 32 years in the legislature, and not to run for re-election resulted in four candidates vying to succeed her and represent the district for the next four years. Mostly likely the election will come down to the incumbent delegates—Ben Brooks, an accountant who has lived in and been active in Randallstown for decades, and Jay Jalisi, a landlord and Reisterstown resident who owns real estate companies. Both are serving their second term in the House of Delegates. That’s where the similarities end.

Many of us have a tendency to make decisions based on first impressions—either good or bad. We want to see the good in folks. That’s human nature. But please, vote with your eyes and eyes open, and do your research. I attempted to do that with the column published in the May issue of the Northwest Voice. My efforts to educate voters were met with a very nasty projectile of malicious lies that to me, felt like desperation on Jalisi’s part.

For the past few weeks, Ben Brooks and Jay Jalisi’s campaign have been competitive but civil. But like the “October surprise” you hear about in the presidential elections, you usually brace yourself for the unexpected. It’s not unusual that in the final days of a campaign the negative tactics go to the next level. The strategy is that a challenger won’t have sufficient time to strategically respond, and voters are left confused and with questions. What the community has experienced from Jalisi’s communications has gone above and beyond nasty and desperate.

Jalisi sent mailers to residents’ homes highlighting the words “ethical violations” and “theft.” We say to Jalisi, and the entourage of minions he’s convinced to partner with him: Be prepared to put up the evidence on these false and malicious allegations, because the only defense for libel is truth. Hopefully the Jalisi political wannabees won’t be left holding the bag when. One community member reported that Jalisi, born in India, told him he is looking for a job in the prosperous Dubai, United Arab Emirates, where family members live.

Pat Kelly, a member of the Baltimore County Democratic State Central Committee (BCSCC) for District 10 and Jalisi supporter, is featured on one of these pieces that was disseminated on social media. She admitted to me that she did not call Brooks a thief, as a social media post claims she did. She had that version retracted, but dug in with the other falsehoods. Fortunately, she is not running for re-election on the Central Committee, but Jalisi and some of his followers are. Danyell Winkey-Smith and Danny Blount have worked tirelessly on the BCDCC for District 10. They, as well as Danita Tolson, deserve your vote.

Another mailer, paid for by the Jalisi campaign, deploys fear tactics to cast doubt on Brooks’ integrity. Jalisi notes that under a bill sponsored by Senators Kelley and Sydnor in the Senate and cross-filed with Delegate Brooks in the House would “create a shadowy ‘authority’ to let developers steal our homes and destroy our communities under the power of eminent domain.” Another version of a mailer, selected sent to certain individuals’ homes, states that the law can “put a Super-Max prison in your neighborhood” and split the black community. Scary stuff, right? Don’t fall for the okey-doke and you should resent this unplugged legislator trying to bait you with nonsensical stupidity and scare tactics.

A Super-Max Prison May Come to the Community? Really?

Here are the facts: House Bill 1427 creates an authority to help revitalize the western county geographic area within the boundaries of Liberty Road in the north, Rolling Road in the west, Baltimore National Pike in the south and the city line on the east. It grants no additional rights that the county and state doesn’t already have. This bill would have spurred progress in the Security Square Mall situation, where the two decaying restaurant structures have languished for decades, and help address the need for more grocery stores and businesses. This authority would include state and local government legislators and staff, including the county administrative officer, Stacey Rodgers.

The vote on this bill by the assigned Environment and Transportation Committee was 23 for, 0 against and one abstention. Guess who abstained? Yes, Jalisi. In the full House of Delegates, the vote was 125-10. Among the nay votes? You got it. Jalisi. Ask the delegate why he would vote against a bill that would help drive revitalization in the district. Petty politics? Ignorance? A desire to be with the eight members of the other party who gave it a thumbs down?

A Tenant Files a Lawsuit

Very outrageous coming from a “landlord” who is being sued by a tenant named Michele Hayes who filed a lawsuit in which his apartment was referred to as an “uninhabitable, unlicensed apartment” infected with drain flies and cockroaches and plagued by water leaks and mold. Jalisi is the owner of HMJ Management Company (named after his official name Hasan M. Jalisi).

Probably even more disturbing is his treatment of working people, including young people at the beginning of their careers, looking to government to make a difference. Soon after Jalisi was elected in 2014 and until 2019, the Maryland General Assembly began formally receiving complaints about Jalisi’s “repeated abusive conduct that was intimidating, degrading, disrespectful, and belligerent.”

Long story short, after counseling by members of the Legislative Ethics Committee, then Speaker Michael Bush and the Majority Whip, about his behavior and improper use of non-disclosure agreements (typically used to keep staffers from sharing information), the legislature finally took action on the bullying. The Legislative Ethics Committee issued a 16-page report and made a number of recommendations including anger management counseling.

If you don’t read anything else, read the conclusion, which begins on page 13. Here’s what the report concludes: “Delegate Jalisi’s conduct went well beyond simply being a demanding supervisor and instead demonstrates a pattern of verbally and emotionally abusive and bullying behavior. Delegate Jalisi misused his State position to abuse and take advantage of individuals that Delegate Jalisi deemed to be subordinate to him. This abusive conduct has continued for the entirety of Delegate Jalisi’s tenure, despite numerous attempts by various officials and employees to counsel him regarding the inappropriateness of his behavior.” Jalisi’s bad behavior went beyond the State House walls. One Annapolis hotel told Jalisi he was no longer welcome to stay there after confrontations with their staff, according to the ethics report.

So, I ask: Has Jalisi changed? Not! Let’s fast forward to the early voting period July 7-14. He brought on some students, including some from Franklin High School, to work the election polls and hand out his literature. That’s admirable—if you have the right motive. Common practice is that poll workers get paid daily. But Jalisi is refusing to pay them until July 20, the day after Primary Election Day. Well after having them work long hours in the hot sun, they inquired about their pay. These young people were rebuffed and decided to cut their losses. They refused to be exploited. They will be working with other campaigns.

Some in the community have described him as a wolf in sheep’s clothing, and a leopard that doesn’t change its spots. For sure, Jalisi can be both charming and cunning. He’s been praised for constituent service but has a documented pattern of treating people, including impressionable young people, poorly.

When the ugly lies stop, the desperation dissipates and the polls close at 8 p.m. on July 19, I believe the community will deliver clear and convincing evidence that it has its neighbors’ backs and demand accountable leadership that will work in the community’s interests, as well as with local, other state, and federal partners to make life better for families and the next generation.

DISTRICT 10, YOU DESERVE THE BEST! Send Jalisi to retirement. Vote for Ben Brooks in the Senate and the Unity Team on Primary Election Day, Tuesday, July 19!