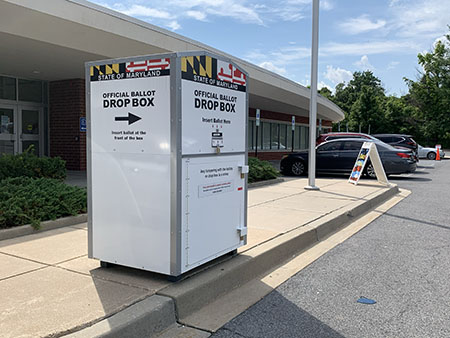 Now that all issues related to redistricting have been settled, all systems are in place for Maryland’s Gubernatorial Primary Election, which will be held on July 19, from 7 a.m. to 8 p.m. Early voting takes place Thursday, July 7, through Thursday, July 14, between 7 a.m. and 8 p.m. For the 8-day early voting period, registered voters can vote by U.S. mail, Board of Election drop box or in person.

You can vote at any early voting site in the jurisdiction in which you live. Baltimore County has 11 locations, including five in the western part of the county. Remember: If you vote early, you cannot vote on Election Day or by mail-in ballot. Registered voters have always been able to vote during early voting, but now people who are eligible but not yet registered, can register on Election Day and vote with the proper identification documents that prove their residence.

Mail-in ballots are not automatically mailed to voters. Any registered voter can request a mail-in ballot online at voterservices.elections.maryland.gov. You don’t need a reason to vote by mail-in ballot. It’s just another way to vote if you don’t want to or can’t go to an early voting center or your polling place.

No stamp is needed, as the envelope will already have postage on it. Voters should fill out their ballot, sign the oath on the envelope and place it back in the mail. The ballot must be postmarked on or before Tuesday, July 19. For questions, email electionabsentee@baltimorecountymd.gov.

For those who would prefer to take their ballot to a physical location instead of mailing it, can do so in a secure ballot drop box 24 hours a day leading up to Primary Election Day on July 19. Addressing concerns about security, the Board of Elections emphasizes that no one has access to the drop off boxes except for trusted election officials, and they will pick up ballots from the boxes every day. The drop off boxes are not the property of the United States Postal Service.

The boxes will be locked and will not accept ballots after 8 p.m. on Tuesday, July 19. Again, make sure that the return envelope for your ballot is sealed and that the oath is signed before returning it.

Your polling place and election district, which may have changed because of redistricting, are noted on the voter notification card that was mailed to your home. You can also look it up at voterservices.elections.maryland.gov.