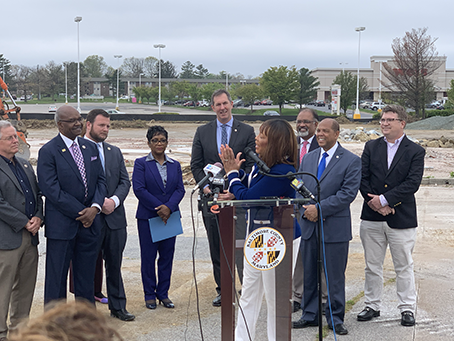 Finally, the former IHOP and Bennigans buildings in front of the Macy’s at Security Square Mall have been razed, making way for new businesses, including a new Chik Fil A scheduled to open this fall.

Residents hope demolishing the eyesores that were visible from Security Boulevard are the start of revitalization at the mall, which has been in decay for years. There is more good news.

On April 26, at a press conference in front of the mall, Baltimore County Executive Johnny Olszewski joined Speaker of the House Adrienne Jones, other elected officials and community leaders to announce $20 million dedicated to a community-driven revitalization of the commercial area surrounding Security Square Mall. Olszewski allocated $10 million in county capital funding for fiscal year 2022, and Jones secured an additional $10 million in state funds.

Also present Ryan Coleman, president of the NAACP Randallstown, and Danielle Singley of the NAACP, who led a rally at the mall in August. The NAACP created a task force of elected officials, local residents and county representatives that they believe brought new attention to the issue.

“All communities are worthy of investment and capable of revitalization, including Security Square which has long been a central community hub in Western Baltimore County that has not yet reached its fullest potential,” Olszewski said in a statement. “With this investment, we are becoming a fully committed partner in the effort to revitalize this critical economic and community anchor.”

Jones said, “Security Square Mall remains a vibrant place for local businesses and an important part of the community, but the property needs significant revitalization and investment. This $20 million investment will jump-start this effort and help bring new life to the community.”

The Security Square Mall was built in the late 1970s and has served as a community hub ever since. There are multiple owners for various portions of the site.

Last year, the county opened a new, state-of-the-art Woodlawn Health Center at the O.W.E. Center at Security Square Mall. The 8,800 square-foot site, managed by the Set the Captives Free Outreach Center, more than doubled the size of the previous center.

The Baltimore County Department of Planning has engaged hundreds of local residents about the future of the mall and surrounding area. Members of the community have shared their concerns about code enforcement and other challenges at the site, as well as their thoughts about what they hope to see in the future.

This fall, the county plans to host a charrette – a process where community members come together with professional architects, design professionals, transportation experts and economists to formally help re-think what is possible for the property. All input gathered so far will be incorporated into the charrette process. The outcome of the process will be a realistic vision for the property’s future.