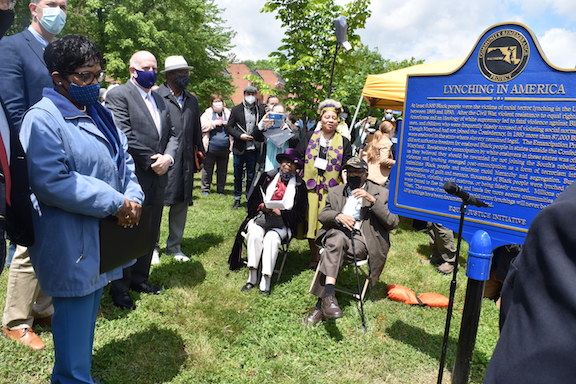 More than 6,600 lynchings have been documented in the United States between 1865— the year the Civil War ended—and 1950, as a result of the efforts of an Alabama-based nonprofit, Equal Justice Initiative. Most of the killings, considered racial terror acts, took place in the deep south. But Maryland was the site of about 40 lynchings— at least one of them in Towson near the old Baltimore County jail.

The victim was Howard Cooper, a 15-year old accused of assaulting and raping a white woman. At a program on May 8, 2021, not far from the site where Cooper was murdered, members of the community, elected officials and representatives from nonprofits who are focusing their work on social justice and reconciliation met to remember Cooper and confront the legacy of lynchings.

Will Schwartz, president of the Maryland Lynching Project, recounted the teen’s story to acknowledge the “painful truth about what happened here in our community, right under our feet. But that is the first step.”

“Cooper was tried for assault, which he admitted, and rape, which he denied. The young woman never testified that she was raped. The jury never left the room. They deliberated for one minute. Cooper was found guilty of both charges. The charges triggered the death penalty, he was sentenced to death.

Lawyers appealed the verdict to the U.S. Supreme Court on the grounds his constitutional rights were denied since blacks were not allowed to serve on juries in Maryland. Afraid the verdict might be overturned, a mob of 50 masked men took matters in their own hands, he continued. They broke down the rear door of the jail with a flagpole, dragged the boy from his cell with a noose around his neck, and hanged him from a nearby sycamore tree.

“It was a terrorist act. It was meant to incite fear. It was an explicit threat and a very public message,” Schwartz said.

Johnny Olszewski, Speaker of the House Adrienne Jones, other elected officials shared remarks. Gov. Larry Hogan issued a posthumous pardon for Cooper and 33 other racial lynching victims. He praised historian Louis Diggs for his work and Loch Raven Academy teacher Michelle St. Pierre and the eighth-grade students in her juvenile-justice class who made the Cooper lynching the focus of their social action project and petitioned him for the pardon.

The event culminated with the unveiling of a history marker placed at the site of the murder to publicly acknowledge Cooper’s lynching and honor Cooper’s memory. The community remembrance project was in partnership with the Equal Justice Initiative and Baltimore County government.

“We should want people to know what happened here. This story – and thousands like it – the history of terror and torture and death and unspeakable cruelty that we inflicted on our own people…. For centuries this history has been denied… or dismissed … swept to the side of the road,” he said.

The next and more critical step to reconciliation is taking responsibility for injustice involves understanding that the legacy of lynching continues to damage, he said, such as the May 2020 murder of George Floyd by a police officer.

Less obvious examples are that the “rates of sickness and death rates of COVID are higher among black people than the white community…a spate of new laws targeting black voters…these are also expressions of white supremacy.”

He pointed to development in communities of color as another example of where “white supremacy is the default setting. Like poor black communities everywhere, East Towson has become a repository for development projects no one else wanted,” Schwartz said.

He noted that the Towson bypass, BGE substation and Black and Decker parking lot all ended up in the community. A more recent example is the 56-unit Red Maple Place affordable housing complex, which the Baltimore County Council approved for zoning in the historically African American community at the intersection of Joppa Road and Fairmont Avenue.

“Another way to honor Howard Cooper would be to honor his community by finding a solution that doesn’t require destroying what’s left of historic East Towson,” Schwartz said.

In 2019, the General Assembly passed legislation that created the Maryland Lynching Truth and Reconciliation Commission. The commission will hold public hearings so people can tell their stories, and will investigate and document lynching cases focusing on the involvement of government entities and news media. The commission’s first report is due in December, and is to include “recommendations for addressing the legacy of lynching that are rooted in restorative justice.”